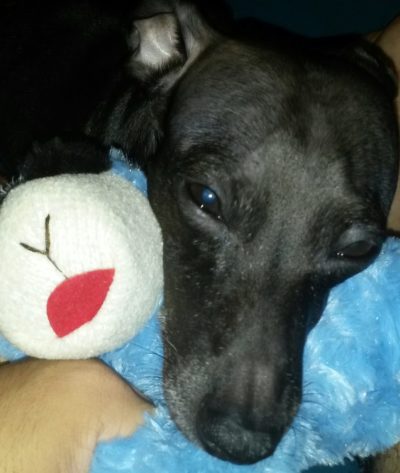 Fourth of July today, I should be celebrating but I can’t.  I’ll admit I’m not as hysterical as I was the other day, but fear resonates strongly with me at the moment.  For the past two days I’ve been pouring over canine heart disease statistics, studies on Pubmed and looking for anything and everything to help heal Angelo.

Heart disease seems especially prevalent in smaller breeds and up to some 60% of aging dogs are affected by it.  It’s a sad statistic, what bothers me even more is that once a dog reaches congestive heart failure, most die within 6-14 months.

I’ve considered heart surgery for Angelo, but believe it or not, there is NO ONE in the United States that does that procedure.  Isn’t that ridiculous?  We spend more on our pets than any nation in the world, have some of the most advanced medical technology and yet, a surgical procedure doesn’t exist to help fix a problem that seems to be so common in dogs?  Bullshit if you ask me.

I have reached out to several cardiologists and other veterinarians to get their opinion.  They all seem to be giving me the same response, “You can wait it out or treat it with pharmaceuticals.”   What about all the risks associated with it?  I really don’t want to have to put him on medication, unless it’s absolutely necessary.  But as we “wait” and let more time pass, the worse his heart becomes.  6 months ago he was fine, now he has heart disease, isn’t that some f*cking rapid deterioration??!!  My brain wants to explode.

Angelo doesn’t seem any different.  If we go out on the deck we can watch some of the fireworks.  Luckily they aren’t loud this year, he hates that.  Maybe I’ll have better luck searching for natural treatments tomorrow.

It’s been a full week since I’ve written.  I hate that dogs age that much faster than us.  If only there were a way to slow it down?  A proverbial fountain of youth?  I’ve never given much thought to aging and mortality, but now more than ever I am obsessing over it.  Can’t lose Angelo, he’s far too young.

I think I have made progress.  I came across two dog nutrition e-books.  One is basically a compilation of recipes and the other talking about dog’s and their longevity.  I feel even more guilty now.  Who the hell knew that commercial dog food was so bad?  Even the really expensive ones?  Reading about the pet food recall of 2007 pisses me off so much, so many dogs got sick and passed away.  Bad nutrition appears to give way to many ailments…including itchy/bad skin.

Speaking of dog food, he won’t even touch that low sodium dog food from the vets office.  (This food was so bad that I ended up returning it and getting my $65 back!)

The recipes in the first book are terrible…chicken gizzards and egg shells?  I guess I could modify it.  But how do I know if it’s good for him or not, furthermore how much do I feed him and how am I supposed to make this in bulk?  The second book has some good studies and theories on aging in dogs, but the recipes border on starvation.

I’m emailing Dr. N copies of these books and asking for some supplement recommendations.  She’s probably tired of hearing from me, but I want her opinion.  I hope it’s good.