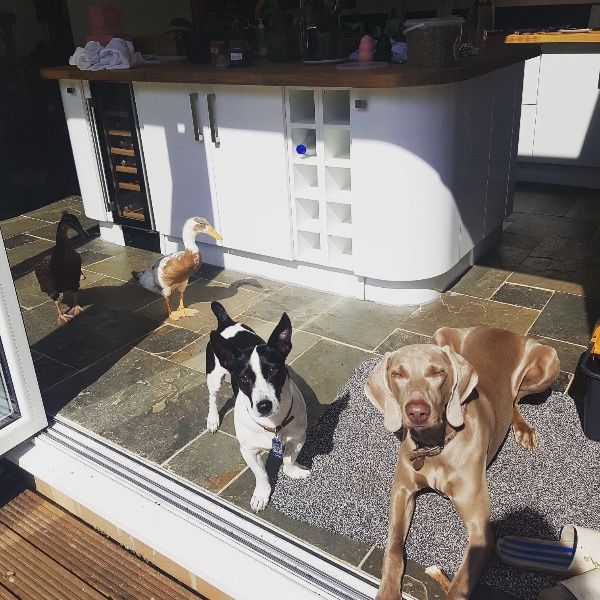 There has been a lot of news lately regarding the flu (for both humans and dogs) and I came across an article about how a flesh eating bacteria can look like the flu.  Basically the symptoms are similar to one another (fever, chills and vomiting).  Because I’m such a germaphobe and am always worried about my fur babies health, it got me wondering if it’s possible for dogs to suffer from any type of flesh eating disease.  Frighteningly it is.

Alabama rot, also known as the dogs “Black Death” can affect all breeds and ages.  One of the first signs are raw looking lesions, which tend to pop up around the elbows and knees.  Within a few days anorexia, lethargy and vomiting can begin to set in.  Even if caught early, treatment tends to only work in a small percentage and more often than not, the disease is fatal.  Two dogs, Dotty & Prince recently contracted the disease:

“Tragically, Lucy Collins’ beautiful Weimaraner Dotty died after putting up a tremendous 14-day battle against the disease that is nearly always fatal.

Her second dog, a 10-year-old Jack Russell called Prince, is still alive as vets treat him on a drip.

A common theme of many of the nationwide cases have been dogs walking in muddy woods.”

The scariest part about Alabama Rot is that there is no vaccine.  This is because experts are at odds with what exactly causes it.  Some scientists feel that Alabama Rot is caused by a parasite, some think it’s caused by a bacteria while others feel that it’s caused by toxins produced by E. Coli.  However, the disease seems to be contracted while dogs are walking in muddy areas or in the woods.  Veterinarians say that the best way to protect your dog against this flesh eating disease is to make sure after walks you thoroughly clean their feet and paws.

As mentioned, Lucy Collins’ Jack Russell, Prince is still battling Alabama Rot.  If you would like to make a donation to help with his medical expenses, you can go to his GO Fund Me Page.

Have you had any experiences with Alabama Rot or know anyone who has?  Comment below.