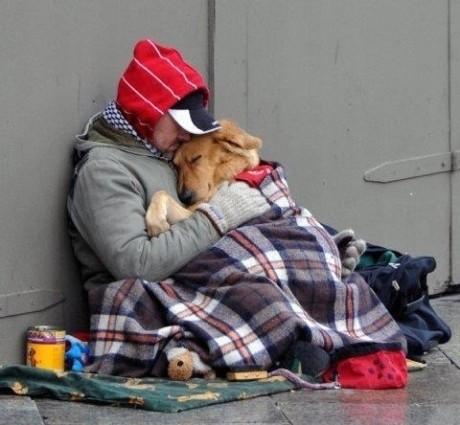 Recently I was reading my local paper and they were talking about how homeless people are staying out of shelters because most do not allow pets.  That really broke my heart.  I understand all the potential pitfalls of allowing animals in shelters and also the argument of, “Well if you can’t afford pets you shouldn’t have them.”  Keep in mind though, you don’t really know someones story or circumstances until you’ve walked in their shoes.

Not to get political by any means, but I am someone who doesn’t back free handouts for everyone.  That idea doesn’t appeal to me.  However, I consider pets family (children in fact) and when people fall on hard times you don’t leave your family behind.  Every now and then we all need a helping hand and food stamps help millions of American’s get back on their feet.  One thing you aren’t allowed to buy with food stamps is pet food, but that all may be changing as Edward Johnston Jr has drafted a petition to allow people to buy kibble and pet treats:

“Pets are part of the family, Johnston argued, and families should not have to break up when they hit what he calls a “financial rough patch.” He is asking that the federal government modify food-stamp rules to make it easier for low-income people like him to buy food for their pets.

The petition has little chance of succeeding, experts say, given the political and logistical challenges of changing food stamps, otherwise known as the Supplemental Nutrition Assistance Program. But it has attracted the attention of nearly 80,000 signers on the popular petition site Care2, as well as a number of animal welfare organizations.”

The idea is that if you are allowed to purchase pet food with food stamps there could be a real reduction in animals going into shelters.  That makes a lot of sense to be honest.  Most of the time pets are abandoned because the family cannot afford them at all.  If their pet is able to be properly fed month after month, that’s one less big expense:

That population is a large one. According to the National Pet Owners Survey, a poll commissioned by the American Pet Products Association, an industry group, 14 percent of all pet-owning households make less than $25,000 per year – which, for a family of four, is roughly the federal poverty limit.

Food costs can also prompt low-income families to surrender or re-home a pet. In a 2015 study by the ASPCA, 30 percent of low-income people who relinquished their pets said they would have kept them if they had a free or low-cost pet food option.

I’ve noticed that when pet owners are unable to afford pet food, they tend to give them human food.  Now, I feed my pups human food.  But it’s a homemade diet that has been specifically drafted for them by our holistic veterinarian.  The food I’m talking about that these pet owners give their animals are along the lines of fast food, a.k.a. McDonald’s.  With over 50% of pets being obese, this doesn’t help them at all.

The biggest hurdle proponents face is that the SNAP program would need to be modified to include food products for both human and animal consumption.  That in itself would require congress to get involved.

Do you think people on food stamps should be allowed to buy pet food with it?