Something or Someone Is Poisoning & Murdering Dogs In This Hawaii Community 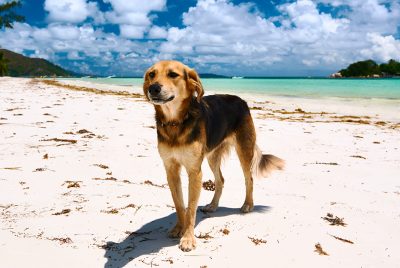 This pisses me off and breaks my heart at the same time.  Especially because this is happening in my home state.  On the island of Maui, residents of a small town are beside themselves and reeling over several dog deaths and serious illnesses that have taken place over the last year.  Some of the bereaved owners attribute the deaths to their dogs eating something toxic:

Members of one family that has suffered the deaths of two dogs have seen numerous 1-inch, rolled-up pieces of cinnamon bread tossed onto their property. The family can’t afford to pay thousands of dollars to test the bread pieces for poison or toxicity.

Many of the local families aren’t sure if these acts are intentional, but I wouldn’t be suprised if they were.  People have been caught on camera trying to poison dogs before in Hawaii.  One thing is for sure though, despite the constant outcry, it continues to happen:

“We need to get more active and vigilant, too,” said kumu hula Napua Greig, who had three of her family’s dogs die in a one-year span. “It’s our dogs. What about your small children? We have to start watching who is cruising through our neighborhood.”

Greig said two of her daughter’s dogs that lived nearby at a former husband’s house died around a year ago. Family members walked the dogs and, when they arrived home, the dogs began throwing up and were very lethargic.

“They took them to the vet. They lasted overnight. They vet tried to save them,” Greig said, noting the mixed-breed dogs died the following morning. Chicken parts were in the dogs’ vomit.

While the dogs could have possibly ingested a dead animal or found something random around to eat, their quick and untimely deaths are often suspect.  Residents have seen strangers wandering around their neighborhood from time to time.  These are far from isolated incidences, The Humane Society says that they have received several reports of potential dog poisonings:

A first-degree cruelty to animals charge, which includes intentionally or knowingly poisoning an animal, is a class C felony, according to Hawaii law. It is punishable by up to five years’ imprisonment and a fine of up to $10,000. Those convicted of animal cruelty are banned from owning pets in the future.

Offenders don’t seem to be deterred by Hawaii’s animal cruelty laws though as dogs continue to fall ill in this quiet neighborhood:

Another resident, Caron Romero, had her dog fall ill late January. Her miniature dachshund spent two days at the veterinarian’s office but survived.

He suffered from septic shock from high levels of bacteria, Romero said.

Another area resident had her dachshund die on March 9. It is suspected that the dog ate “something very toxic” because it had “full-on liver damage,” said the resident, who did not want to be identified for fear of retaliation.

She declined a necropsy on the dog, which was a “very healthy, lively, little doggie” at 3 years old.

And just a month before, another dog of hers died. It was an English pointer. The pet was 12 years old, but family members did not expect it to die suddenly.

In the case of the dachshund, both wife and husband realized that rolled pieces of cinnamon bread were present when the dachshund was still alive. They are unsure if the dog ate the bread.

It might be common sense to test the bread that has been found for toxins or poisons but the costs associated with testing would be thousands of dollars.  So for the time being the pet owners of this small rural neighborhood continue to live in fear of what may happen to their fur babies.