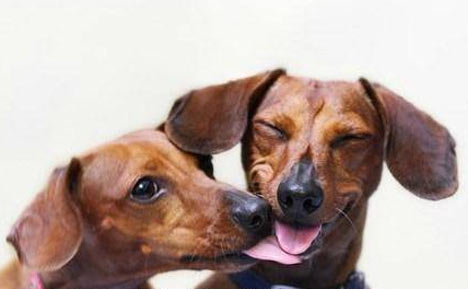 Here we go again.  Another sensational story regarding the kissing that goes on between humans and their fur babies.

Dr. John Oxford is a Virologist, and the founder of Retroscreen Virology.  He says that since dogs spend half of their life with their noses in “nasty” corners or hovering over dog droppings, their muzzles are full of bacteria, viruses and germs.

Dr. Oxford cites salmonella, campylobacter and ringworm as some of the things that your pups can pass on to you.  In a previous article I outlined the benefits and potential risks when kissing your pets.  But Oxford goes a step further and wants everyone to know the dangers of toxocariasis, which is spread through dog fecal matter and in RARE cases can cause blindness.  In all fairness, it’s part of Oxford’s job to help educate the public about such things, but personally, he could work on his delivery and develop a little more tact while he’s at it.

Ocular toxocariasis occurs when the Toxocara larvae get into one’s eye, usually by coming into contact with contaminated feces and then rubbing the eyes. Symptoms include vision loss, eye inflammation or damage to the retina.

The CDC has outlined some guidelines for prevention.  One of the most important precautions you can take is to discard and quickly clean your pets area after they defecate.  Also, don’t forget to wash your hands thoroughly as well.  In addition, you want to make sure you take your pup’s to the vet at least once a year for annual exams (including fecal sample testing).

One of the things we do is clean Angelo & Aries area with 3% hydrogen peroxide.  It’s safe and doesn’t pose a health risk.  Also, it kills e.coli, salmonella and other forms of bacteria.

If you’re concerned about them having a dirty muzzle (as Oxford says), you can also wipe it down with 3% hydrogen peroxide.  We do this if they are playing in places they shouldn’t be and in addition wipe their paws with it as well.  Just pour a little on some paper towel and wipe away.

You will just want to make sure they don’t ingest large quantities (we’re talking spoonfuls here), if they do, then they might get an upset tummy and vomit.  In fact, 3% hydrogen peroxide is one of the things you want to include in your pet first aid kit (just in case they eat something toxic and you need to induce vomiting).

What other tips do you have to keep your pet clean?  Comment below and don’t forget to share!