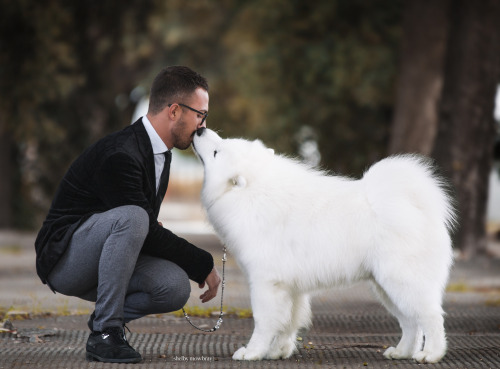 One of the things we like to do is kiss Angelo and Aries…a lot.  We can’t count how many kisses we get each day from both of them.  What we do know is that one can never get enough kisses.  That’s why I was perplexed one day (a few years ago) when someone said that it was gross and that I could get sick from pets.

Most pet parents can imagine my disdain and irritation when someone throws out comments like that (seriously they get a big eye roll from me).  I thought it was illogical, nonsensical and something that a dog hater would say (yes those people exist and we know it!).

In all seriousness it’s more likely you’ll catch an illness from another person than a dog.  Take great care when you shake hands, kiss strangers or even when standing in a crowd.  Doesn’t it seem slightly overblown when people tell you not to kiss your fur baby?

In the past year there has been some articles that have come out which support the theory of humans getting sick from kissing pets, while others feel it’s healthy for us to kiss our pups.  Who do we believe?

So because we like to be objective, we should point out that there are several things that you could catch from kissing your pup.

The Benefits of Dog Germs

Believe it or not there have been studies conducted that show kissing our dogs can actually benefit our health.  Besides all the love, there are some other physical health benefits.

The choice to kiss your pup is entirely yours, but unless your pet is rummaging through contaminated food, spending a significant amount of time away from home (say wandering the streets or alone in the wild) or consistently eating anyone and everyone’s fecal matter, then chances are it’s safe to continue getting wet sloppy licks from them.

What do you think?  Do you kiss your dog all the time?  Comment below and don’t forget to share!

3 thoughts on “Kissing Your Dog: Cute & Healthy Or Gross & Deadly”